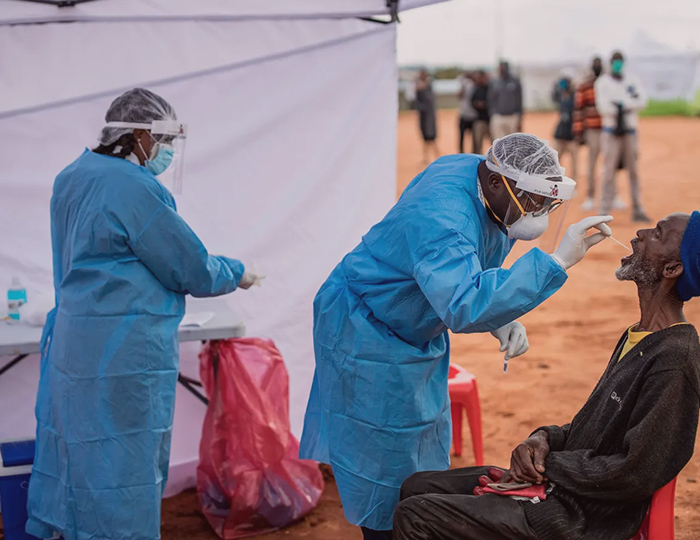 COVID-19 cases jumped 18% last week and are at their highest levels since April, and the increase comes as the more transmissible Omicron BA.4 and BA.5 subvariants cause most infections, the World Health Organization (WHO) said today in its latest update.

About 4.1 million cases were reported to the WHO last week, likely an undercount given reduced testing in many countries. The United States, Germany, Brazil, Italy, and China reported the most cases.

At a briefing today of the WHO’s Pan American Health Organization (PAHO), officials said cases rose in all four subregions in the Americas, with a jump of 24.6% in South America. Cases in North America rose 7.7% last week, mainly due to rises in the United States and Mexico.

The WHO said BA.4 and BA.5 subvariants continue to make up an increasing proportion of sequenced samples. Both share a mutation linked to greater transmissibility, and early indications suggest that evolutionary changes increase immune escape following infection or vaccination.

The pandemic changing ‘but it’s not over
At a WHO briefing today, Director-General Tedros Adhanom Ghebreyesus, Ph.D., said cases are rising in 110 countries, fueled by BA.4 and BA.5 in many countries. “This pandemic is changing but it’s not over. We have made progress, but it’s not over.” He reiterated his concerns about reduced testing and genetic sequencing, which reduces the world’s ability to track outbreaks and virus changes.

Taking stock of the world’s vaccination status, Tedros said only 58 countries have reached the mid-year target of vaccinating at least 70% of their population, with the average rate in low-income countries at 13%. He urged countries to vaccinate 100% of their health workers and people over 60 as soon as possible, noting that 75% of the group is now vaccinated.

For the general population, Tedros said it’s important to keep strengthening immunity, which helps reduce the severity and longer-term impacts of the disease. “Even relatively ‘mild’ cases are disruptive and damaging, keeping children out of school and adults from work, which causes further economic and supply chain disruption,” he said.

Critical need for next-generation vaccines
Tedros said though it makes sense to update vaccines to cover evolving variants, the pace of mutation means the world continues to play catch-up. Second-generation vaccines that stop or reduce infection would be a major step forward, but ideally, the solution is a pan-coronavirus vaccine that covers current and future variants, he said.

In a related development, BioNTech said today that it and Pfizer would begin human trials of a pan-coronavirus vaccine in the second half of the year, according to Reuters, which cited slides from the company’s investor day.

US booster uptake lags
Booster uptake is lukewarm in some US age groups, according to an ABC News report that looked at federal data. Less than 10% of eligible children ages 5 to 11 have received a booster dose, and just 28.7% of adolescents ages 12 to 17 have gotten an extra dose. And less than 40% of eligible adults ages 18 to 49 have received the third dose.

The 7-day average for new daily cases is 113,849, with daily deaths averaging 385, according to the Washington Post tracker. Cases are up 21% in the past week, with deaths up by 41% and hospitalizations rising by 8%.

In other US developments, Eli Lilly said today that it would supply an additional 150,000 doses of bebtelovimab, a monoclonal antibody treatment under emergency use authorization for the treatment of mild-to-moderate COVID-19 infections in people ages 12 and older.

The drug continues to show neutralization activity against emerging Omicron variants, including BA.4 and BA.5. The purchase is worth $275 million and is expected to meet demand through late August.