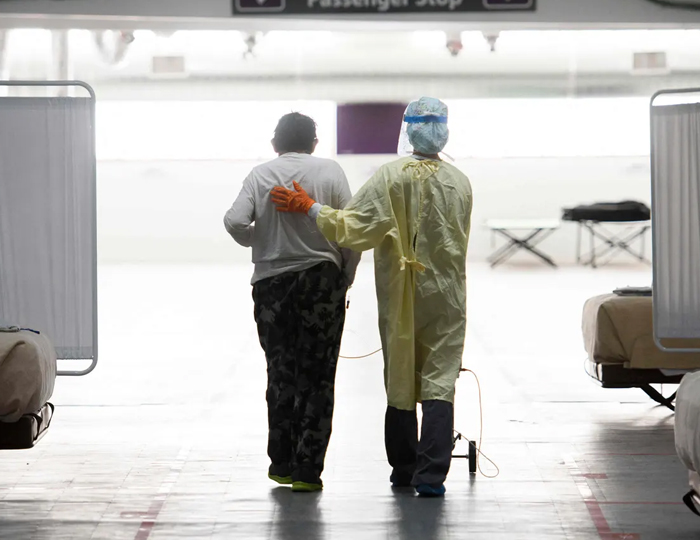 When the US federal government’s pandemic health emergency declaration expires, millions of Americans are at risk of losing healthcare coverage through Medicaid with potentially devastating consequences.

According to an analysis by the Kaiser Family Foundation, an estimated 5.3 million to 14.2 million could lose their Medicaid coverage when the Covid-19 public health emergency ends on 15 July if it is not extended.

Dylan Brown of New Jersey is disabled and relies on Medicaid for a home aide he requires around the clock to be able to get out of bed, dress, and feed himself. He constantly worries about losing his Medicaid and Social Security disability insurance due to income and asset eligibility requirements and is very concerned about losing Medicaid when continuous enrollment ends.

“As I’ve been learning, trying to maintain my eligibility, you get a different story every time and you just have to hope one of them is right. And I’ve sort of been learning, none of them are right,” said Brown.

Without Medicaid, he would have to rely on his parents, who work full-time, to provide the care he needs and pay out of pocket for care to the extent his family could afford it. These options, Brown argued, aren’t feasible as he is planning to start law school this fall at Rutgers University, and his parents shouldn’t have to uproot their lives to help him function, which is the responsibility of Medicaid.

“There shouldn’t be a cutoff date. There’s no reasonable argument for not giving disabled people the care they need to survive,” added Brown. “Regardless of what you’re feeling on whether people should have free healthcare, the disabled need it. There are no alternatives for us. It’s Medicaid or bust, and when the Medicaid rules are this convoluted and hard to keep track of, it almost feels like a full-time job just keeping my benefits.”

During the pandemic, the federal government required states to continuously enroll Medicaid recipients into the program, providing $100.4 bn in new funds to cover the costs of doing so, halting coverage gaps and loss of eligibility for those who rely on healthcare coverage through Medicaid.

The current pandemic health emergency declaration is set to expire in mid-July. It is expected to be extended again, but an extension date has yet to be set by the US Department of Health and Human Services.

“Medicaid provided invaluable coverage to individuals during the pandemic. And there’s evidence that it helped insulate people from loss of coverage that is associated with job losses, especially in the early stages of the pandemic,” said Dr. Eric T Roberts, assistant professor of health policy and management at the University of Pittsburgh. “Now, we face this unwinding of those provisions and a lot of confusion to beneficiaries and the public about how individuals will navigate that process and the schedule on which they will be required to do so. I think the great concern is that people lose their coverage without really knowing it until they need it.”

Roberts said policymakers need to address these problems, as Medicaid determination and redetermination are complex already. Those complexities are magnified when states have to start conducting those determinations on such a large scale without the proper administrative and navigational assistance and resources in place.

“There is already a significant amount of administrative complexity to navigate Medicaid from the beneficiaries’ perspective and that can uniquely disadvantage people who have greater difficulty just navigating the healthcare system in general, the most vulnerable,” added Roberts.

Zachary Fusfeld of Philadelphia, Pennsylvania, a Ph.D. candidate in epidemiology at Drexel University, is anticipating the loss of his Medicaid coverage when continuous enrollment ends because his university stipend increase will put him over the income limit.

A type one diabetic who suffers from other illnesses, Fusfeld said he will have to rely on his student healthcare and pay out of pocket for copays on medications, medical supplies, and doctor visits when his Medicaid coverage ends later this year, the costs of which are not affordable and not covered by his pay increase.

He recently required surgery on his ankle and is worried about affording the physical therapy he requires, though he noted many people are facing the loss of Medicaid and don’t have any sort of supplemental insurance coverage as he does.

“I’m really worried that I’m just not going to be able to properly manage my health and life in a way that I can stay as healthy as I need to be,” said Fusfeld.

Chris Bergh of St Louis, Missouri, relies on Social Security disability insurance for income and Medicaid for medical coverage. He’s concerned about the risk of losing medical coverage through Medicaid when the pandemic emergency is lifted.

“I’m at risk of losing coverage because I lost track of a piece of mail and the instructions in the letter were unclear about how I was supposed to proceed,” said Bergh.

He has repeatedly attempted to call Medicaid’s service hotline but hasn’t been able to get through to speak to an actual person. Without Medicaid, he wouldn’t be able to see his doctors, afford his prescription medicine, or get dental care.

“I think they make this system harder than it has to be, in the hopes of weeding people out, just like other public assistance programs,” added Bergh. “I’m on social security so I have a fixed income and don’t make enough to cover the out-of-pocket cost of these things and still be able to eat and do other things.”

Congratulations on being one of our top readers globally – you’ve read 52 articles in the last year
Article count
on
As you are joining us from India. we have a small favor to ask. Tens of millions have placed their trust in the Guardian’s fearless journalism since we started publishing 200 years ago, turning to us in moments of crisis, uncertainty, solidarity, and hope. More than 1.5 million supporters, from 180 countries, now power us financially – keeping us open to all, and fiercely independent.

Unlike many others, the Guardian has no shareholders and no billionaire owner. Just the determination and passion to deliver high-impact global reporting, always free from commercial or political influence. Reporting like this is vital for democracy, and fairness, and to demand better from the powerful.

And we provide all this for free, for everyone to read. We do this because we believe in information equality. Greater numbers of people can keep track of the global events shaping our world, understand their impact on people and communities, and become inspired to take meaningful action. Millions can benefit from open access to quality, truthful news, regardless of their ability to pay for it.