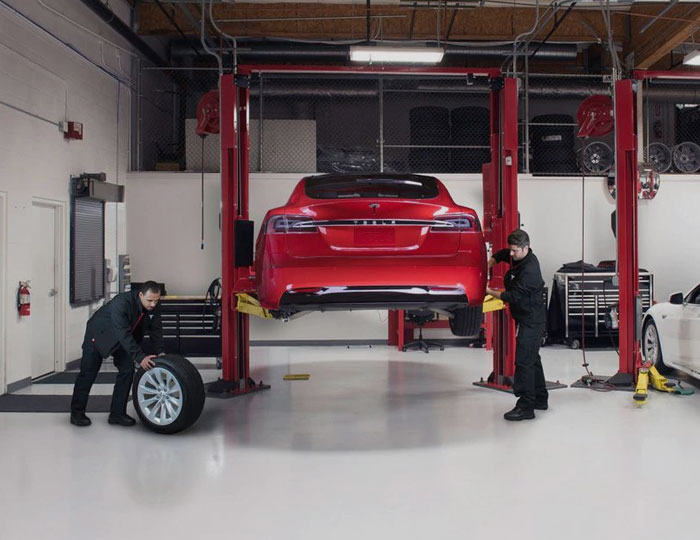 Tesla is sending some of its employees who are not in service and are untrained to work on cars into service centers to fix vehicles. It looks like Tesla’s service issues are bigger than we thought.

Tesla is sending some of its employees who are not in service and are untrained to work on cars into service centers to fix vehicles. It looks like Tesla’s service issues are bigger than we thought.

Earlier this month, we reported on CEO Elon Musk’s announcement that Tesla is working on service in North America and how Telsa is aiming to make the majority of appointments same-day repairs. As we noted, it is much needed since Tesla’s customer fleet is growing much faster than its service infrastructure.

Last week, the CEO also held a companywide meeting at Tesla where he said that the automaker wants to ‘revolutionize’ service with bigger centers and more specialization.

Musk made it sound like the company was mostly engaging in an effort to revamp its service division, but we now learn that there are more serious issues with service short-term that Tesla is trying to address.

Sources familiar with the matter told Electrek that Musk has strongly communicated internally that he is unhappy with the state of Tesla’s service and he is making it a top priority.

It is so much of a priority that Musk has canceled sales and delivery targets for the quarter and pulled employees from those teams to work on service. The result is that sales employees, entry-level workers or managers, who have no training in servicing cars, are finding themselves in service centers working on vehicles.

To be fair, they are focusing on easier tasks, like changing tires, but it is still an extreme solution that points to a more extreme problem with Tesla’s service.

Sources familiar with the matter told Electrek that the main concern is reducing the metric of “next available appointment,” which is the time between when a Tesla owner requests a service appointment and when Tesla has service slots available.

That metric is widely different depending on the market, but there are some markets in North America where Tesla owners can currently not get a service appointment for up to a month. Musk wants no more than a week and, as previously reported, he also wants two-thirds of appointments to be same-day.

Service availability changes widely in different regions. I had heard from owners about some long wait times, but I didn’t know it was big enough of an issue. Apparently, Tesla is internally concerned about this issue for many reasons.

Interestingly, I’m hearing that Tesla is also concerned because the service appointment time is sort of public data since anyone with a Tesla vehicle can go through the app and check it out, which means that Tesla shorts can use the data. Tesla doesn’t like that.